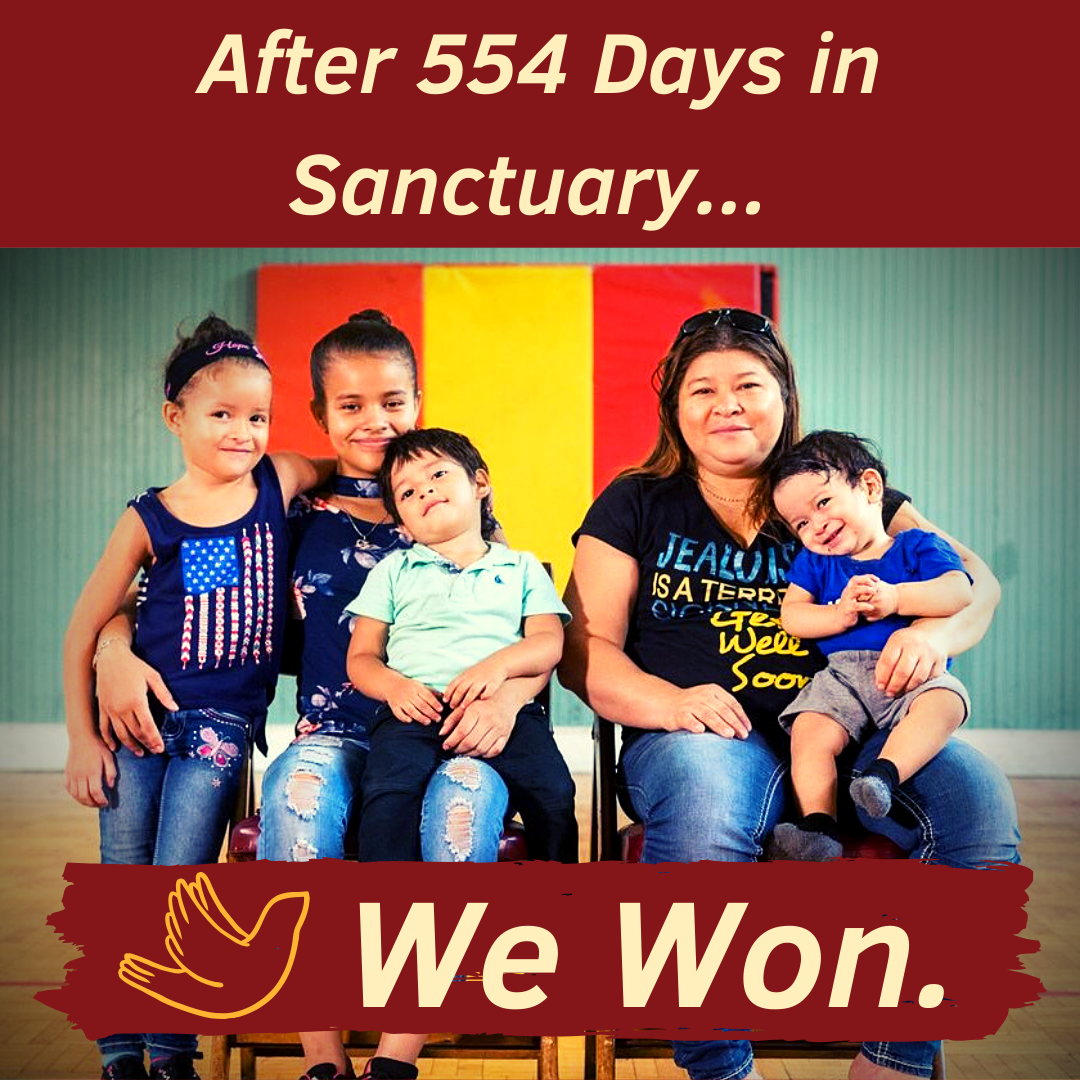 I feel like a bird in the sky with my wings spread. I am so happy that I won my freedom”  – Suyapa Reyes

After spending more than 500 days in Sanctuary at the First United Methodist Church of Germantown (FUMCOG), Suyapa Reyes and her four children won their campaign and can safely leave Sanctuary. Suyapa was granted deferred action by the federal government. We celebrate the persistence of Suyapa and her family as well as their decision to use their victory to shine a light on Carmela and her children who continue to live in Sanctuary. 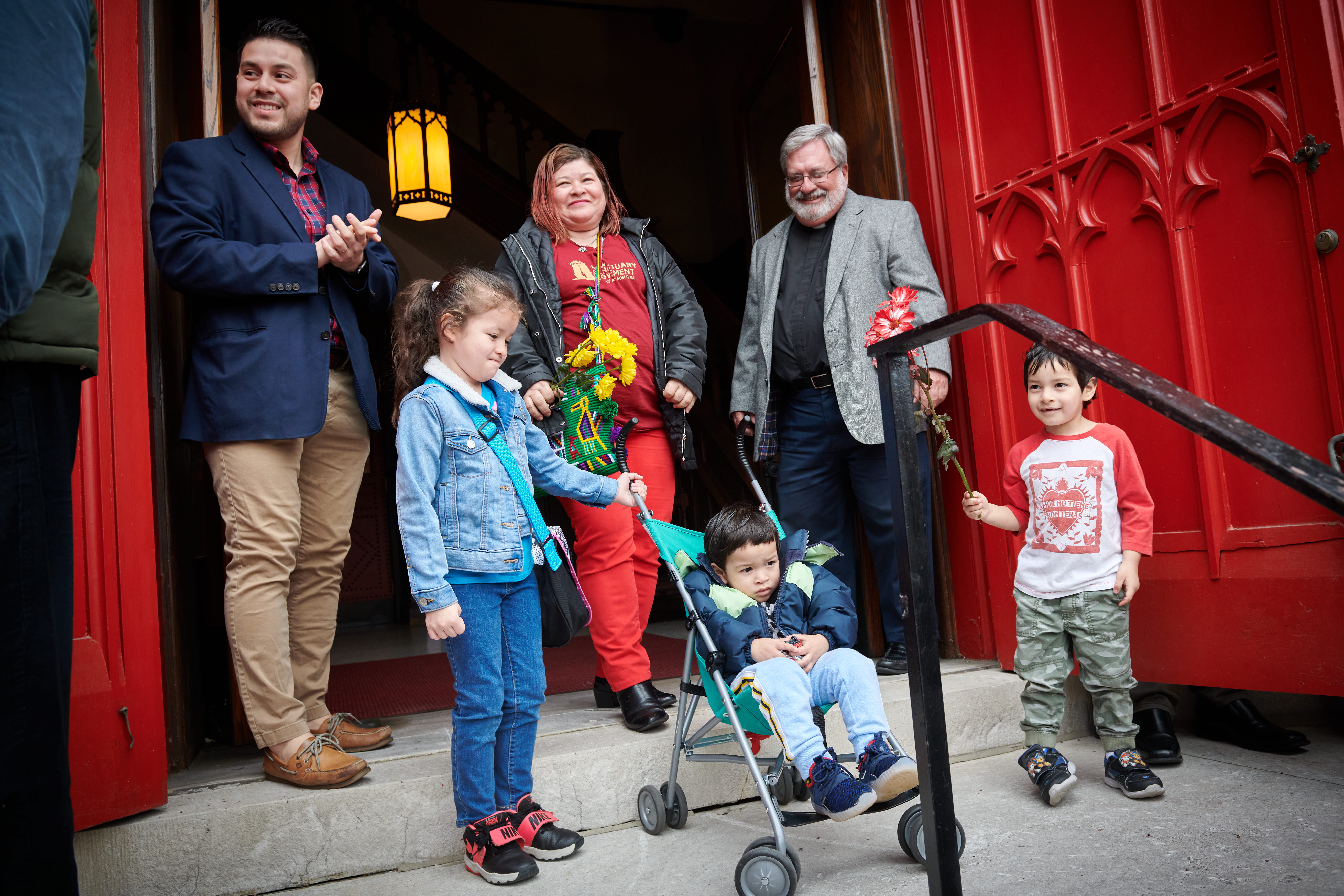 Suyapa and her family were targeted by ICE, as many asylum-seeking families have been, and threatened with separation from her four children. The Obama administration wrongly denied her asylum case, and the Trump administration forced her into sanctuary when they moved to deport her. Suyapa fought to keep her family together and won.

This victory demonstrates the power of communities coming together,  acting boldly in the face of extremist laws.

This year-and-a-half long campaign would not have been possible without the organizations and people who poured time, energy and love into the Reyes family – beginning with the congregation that opened their doors. First United Methodist Church of Germantown (FUMCOG) responded to the call to action with urgency, compassion and dedication. From hosting monthly fundraising dinners to recruiting volunteers to supporting the family’s daily needs to countless strategy meetings, FUMCOG provided the space for a community to emerge, gather and evolve around Suyapa.

Similarly, the Free Migration Project has been dedicated to this campaign every step along the way. We are grateful for their legal strategy work, guidance and dedication to fighting for all families in Sanctuary.

Big shout outs to Puentes de Salud  for providing health care and caring for the Reyes youth. La Puerta Abierta, for extensively sharing their expertise and strategy on support around emotional health for immigrant parents and minors. The strong work on turnout and  participation of NW Philadelphia Immigrant Action and Mobilization. The time donated by Colibri Workshop to produce media. All congregations who brought monthly potlucks, restaurants that donated food, daycares that provided support and education to Suyapa’s children and every volunteer who helped with different tasks.

Last but not least, thank you to everyone – parents, grandparents, neighbors, activists, and artists – who showed up when Suyapa called and needed you. The relationships and visions of freedom that we created together do not stop here – Suyapa’s victory is a rallying cry to believe in our power and channel this momentum forward to win all Sanctuary campaigns.. 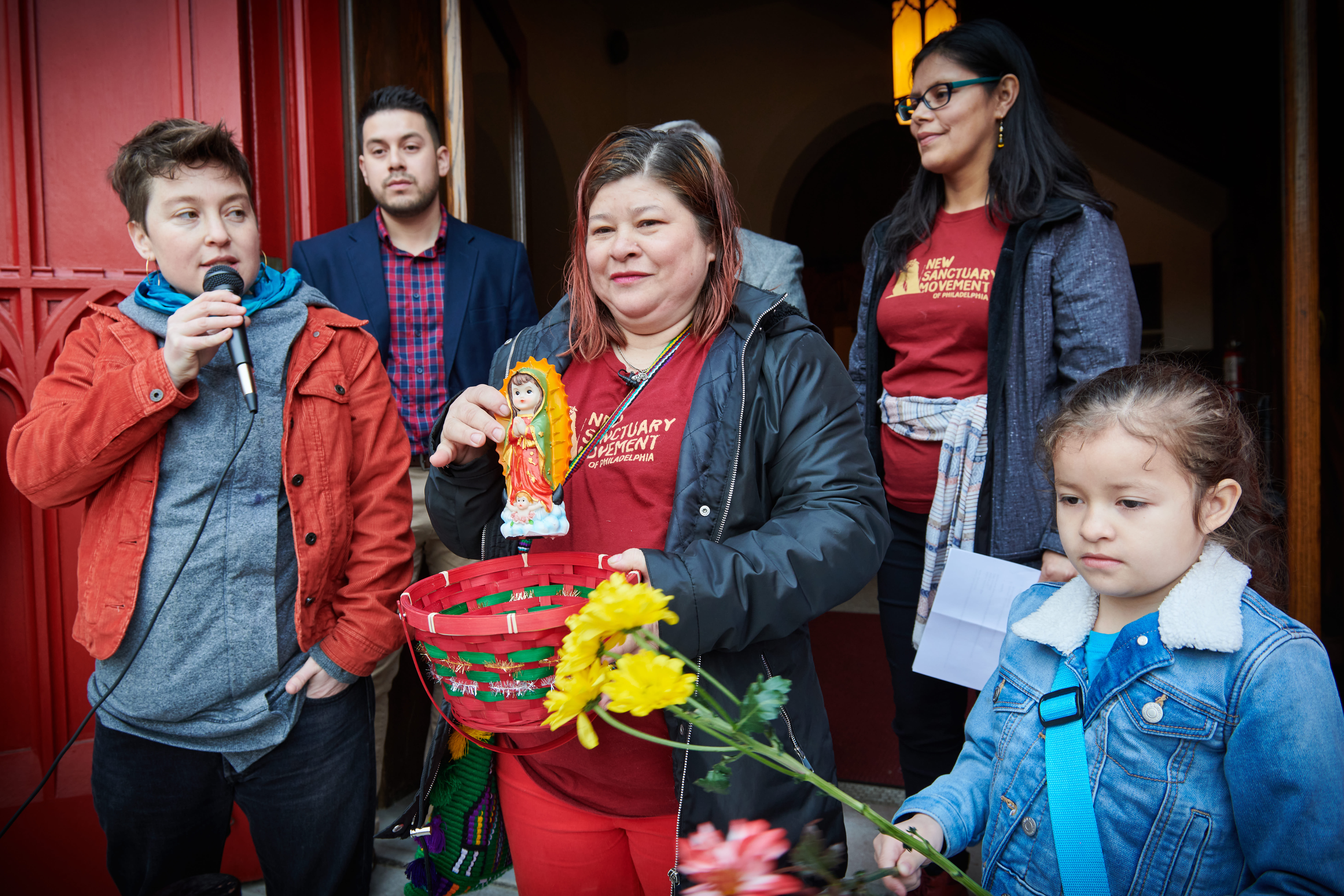 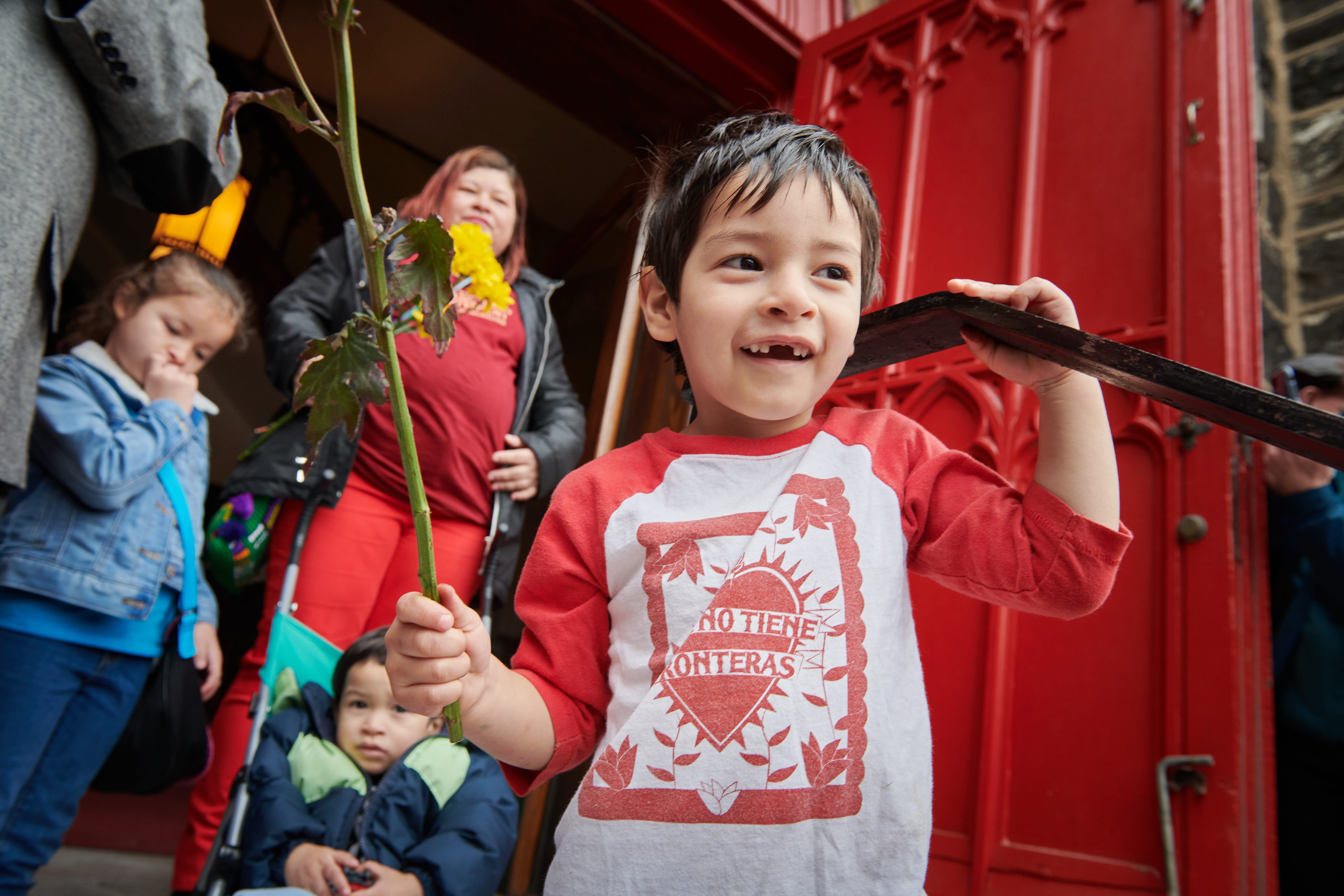 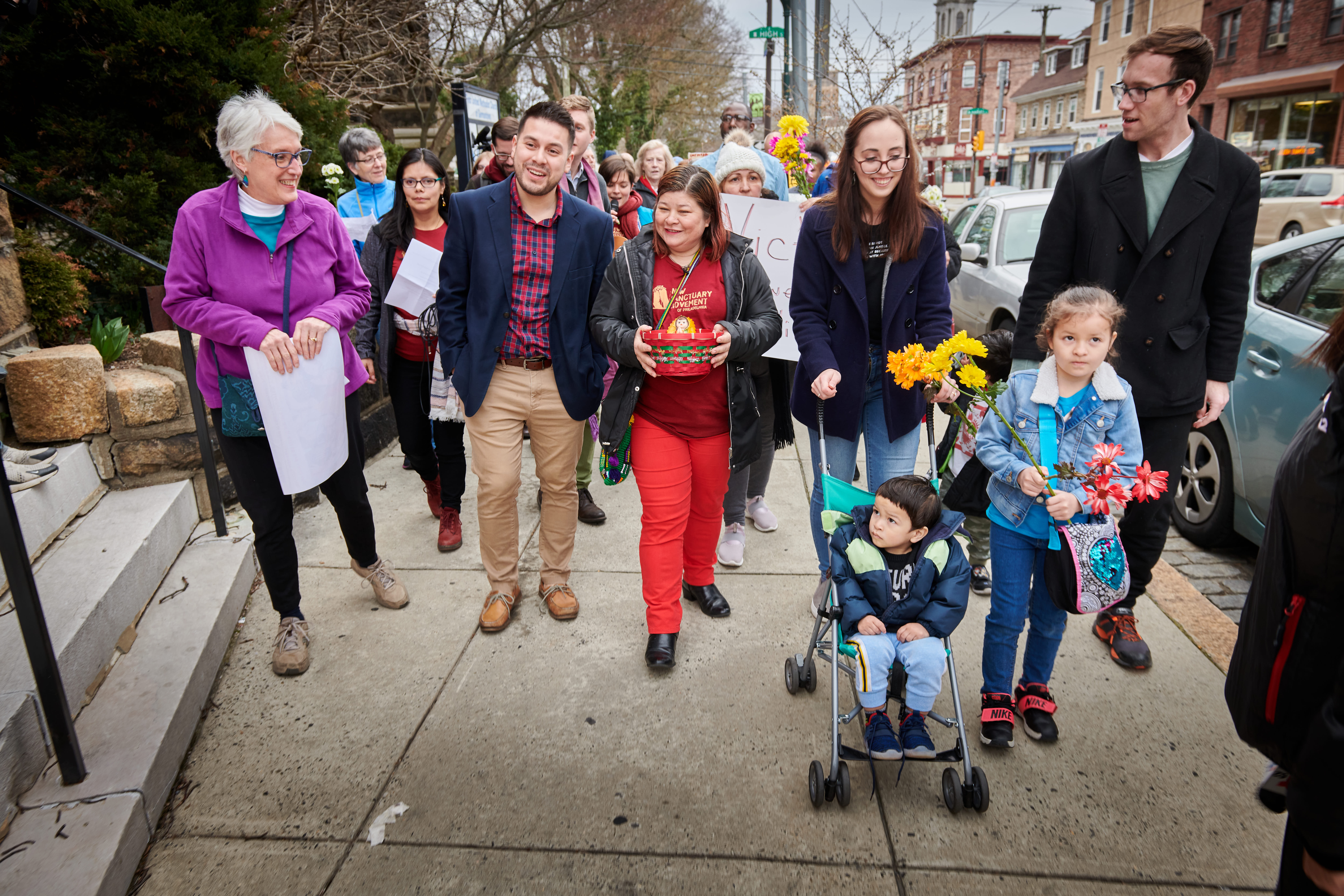 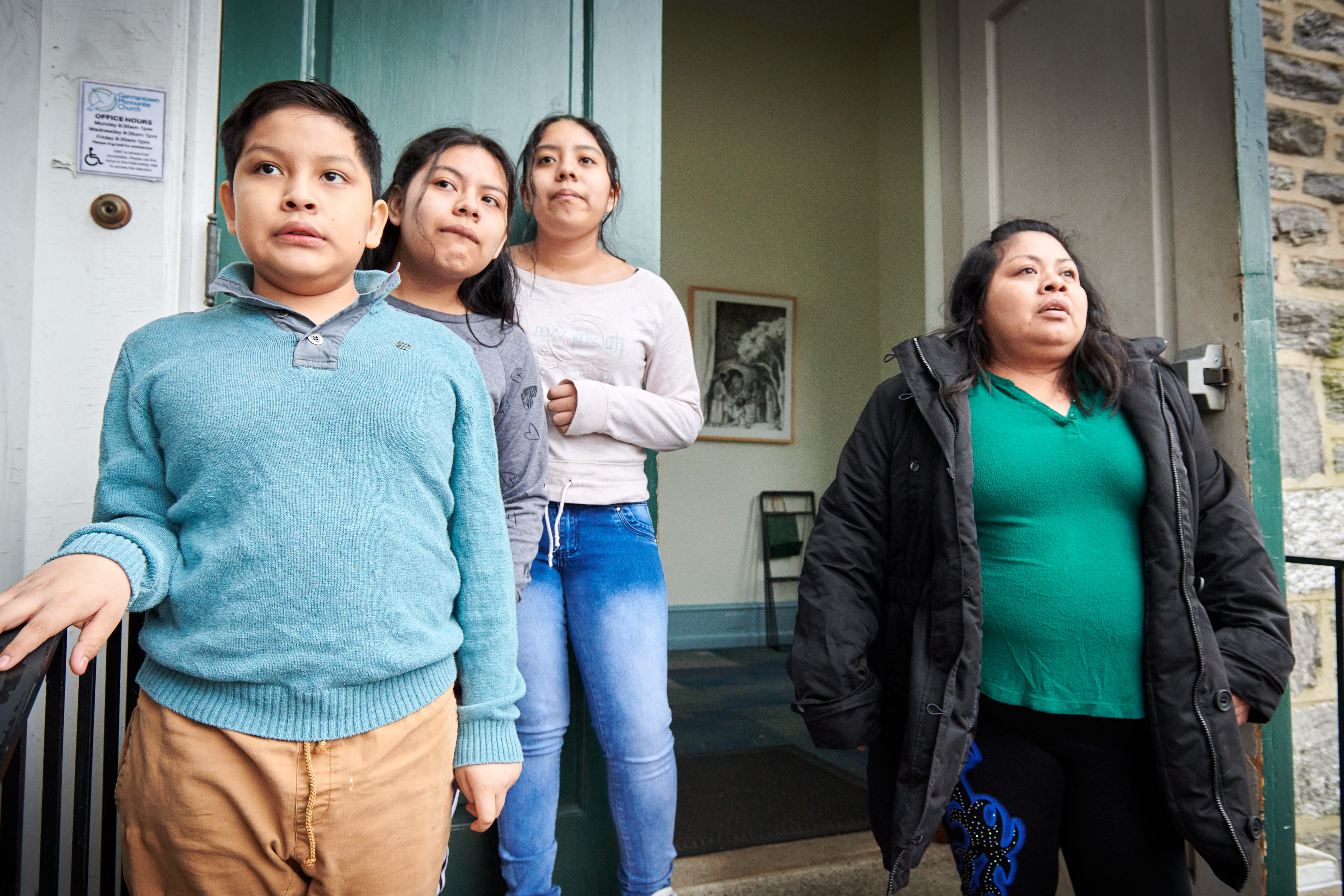 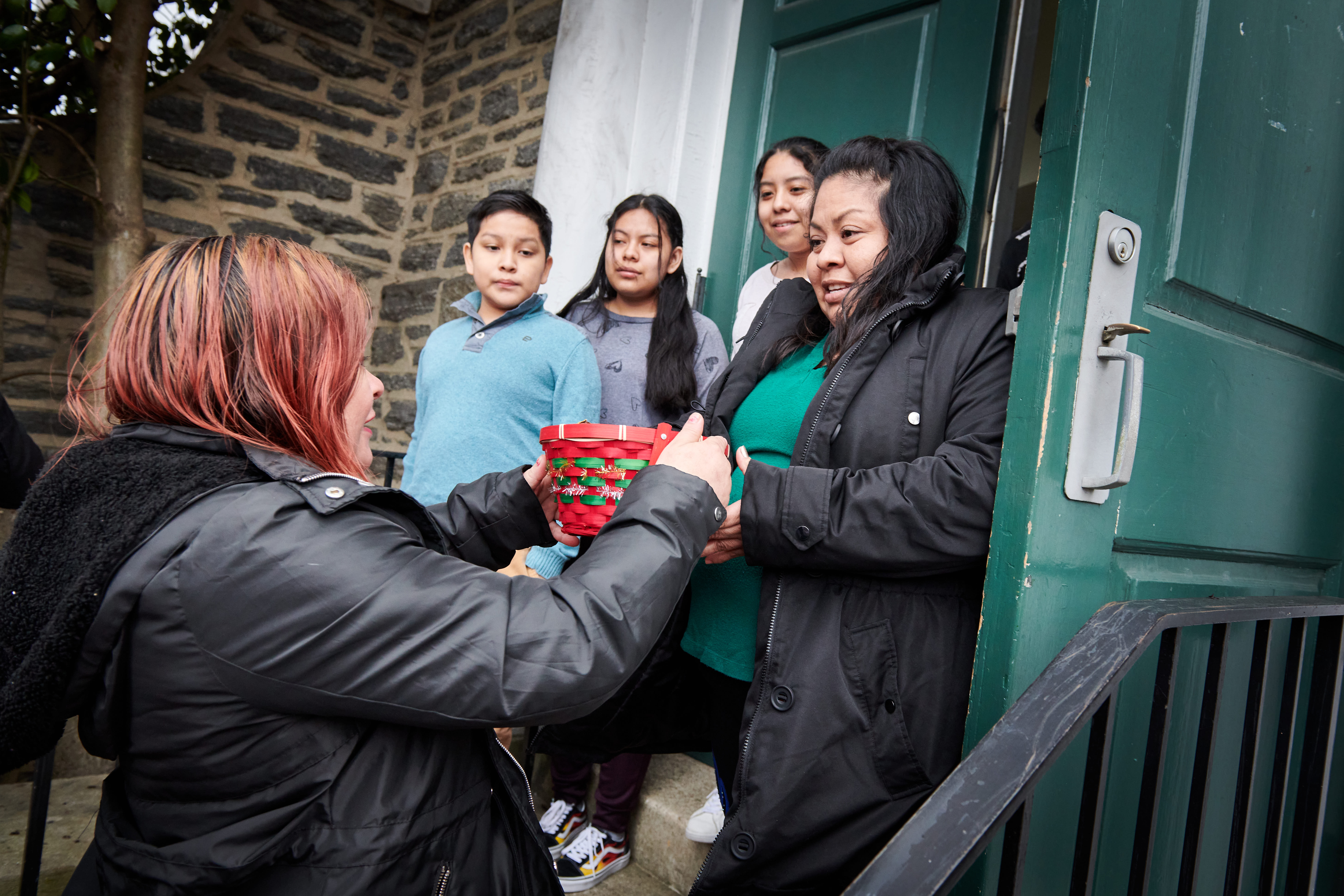 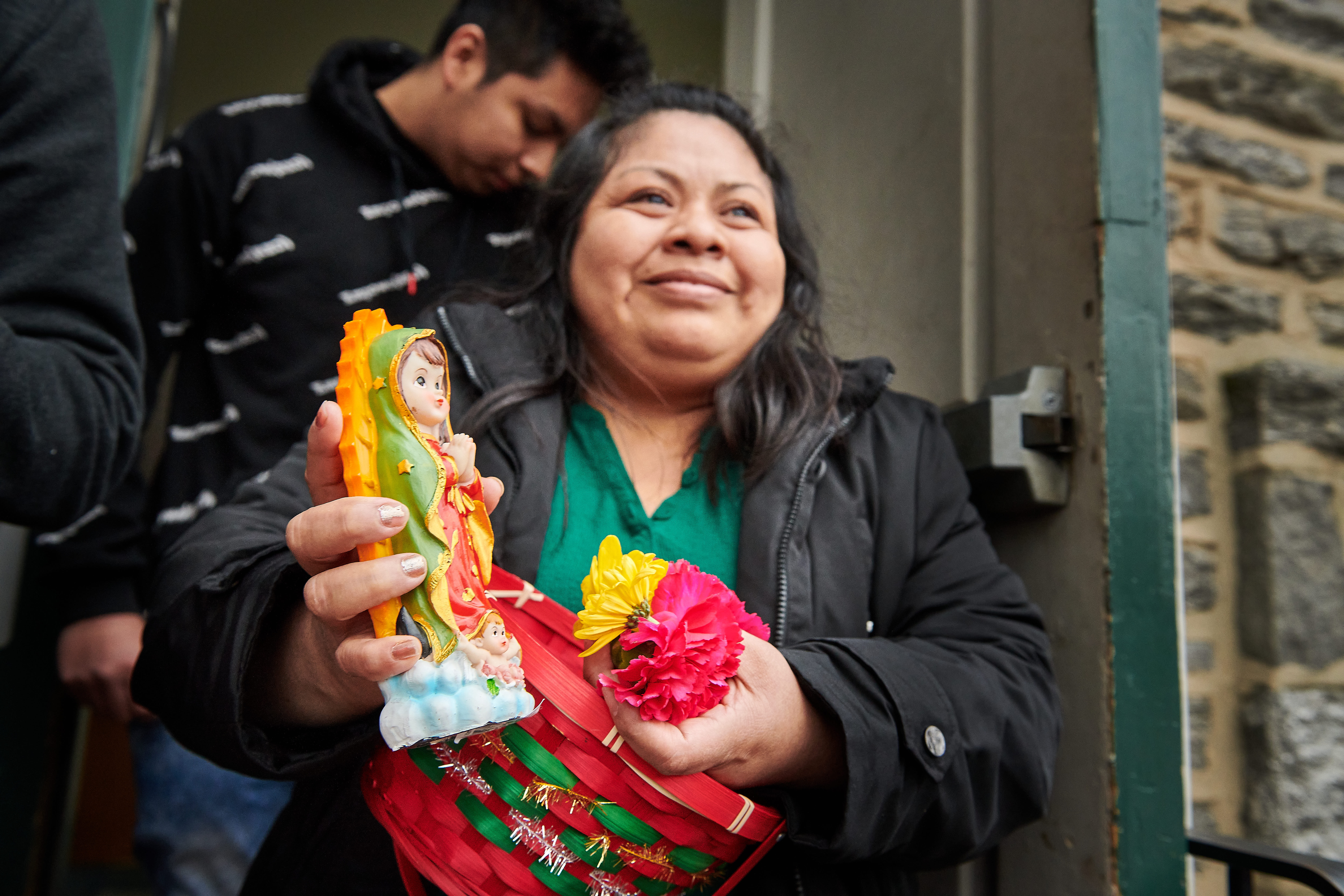 On March 13th, Suyapa stood outside the doors of the church she and her family have lived in for 18 months, and through tears of joy, announced her victory.  Suyapa shared that this was a bittersweet moment,

“I am very happy to leave today but I am also a little sad to leave all of you. But I know that I continue to count on all of your support,” Suyapa said.

Suyapa made it clear that she plans to use the visibility and power of her victory to support the ongoing fight of her friend Carmela Apolonio. Thursday’s march concluded with Suyapa walking up the steps of Germantown Mennonite Church to gift a statue of Mary, mother of Jesus, to Carmela as a symbol of her solidarity.

“I always believed nothing is impossible. And look, Suyapa’s free! Thank you for all of those phone calls [to legislators] that you made that supported Suyapa’s case and are supporting mine… If their decision is a negative one, I will not lose hope. Today is Suyapa’s victory and I hope that someday soon we will be celebrating my victory and I will be able to be here with you all.” – Carmela

This past Thanksgiving week, the Thompson’s petition to adjust status requested by their daughter got approved. This is A HUGE...